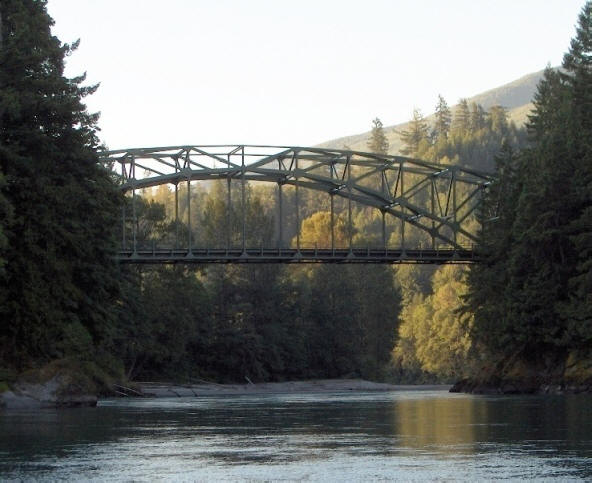 Well, there is your bridge. Handed to you on a silver platter by the people of Skagit County. All you had to do to get it was work yourself into alternate states of fury and despair over a period of eighteen or twenty years before someone noticed that a bad situation wasn’t getting any better that our wails in the wilderness were of some distress. It takes a lot of time to convince a few stubborn men who don’t want to understand, a very short while to convince a lot of common folks. So, when you get around to watching the final steel go into place on that bridge across the Skagit river, make sure that on the inevitable plaque that goes with its price there are no dedications to glory for the few men whose duty it was to make the plans and buy the steel. Instead, let’s have a simple wording of honesty and truth – “This bridge built by the people of Skagit County.” I wager folks will come for miles around to see that plaque alone, it would be so unusual. 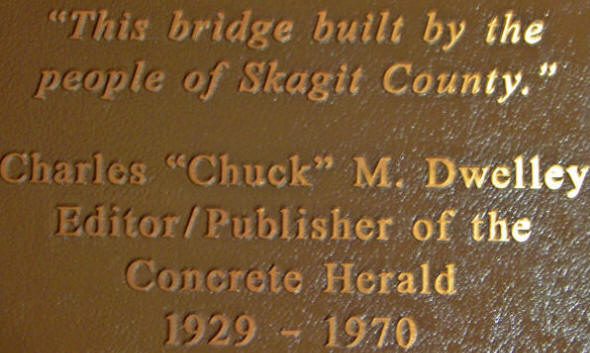 About The Historical Newspaper Archive

The archive began as an idea of Dan Berentson, Skagit County Government Communications Director who enlisted the support of Larry Kunzler who in turn made the archive a family project by offering the efforts of his sons Josef and Jeffery as well as his wife Linda.  Efforts began in the autumn of 2004 to research and place online almost 1,000 newspaper articles - mostly relating to Skagit River floods - from the Argus, the Burlington Journal, the Mount Vernon Daily Herald/Skagit Valley Herald, the Courier Times and in the summer and autumn of 2005 the Concrete Herald.  While www.skagitriverhistory.com maintains the historical newspaper articles by decade arranged in chronological order, Skagit County Government maintains the historical newspaper articles by newspaper and has a Concrete Herald page.

About The Dalles Bridge

The Dalles Bridge and adjoining road was constructed between November 1950-August 1952 after a successful $700,000 countywide bond issued in November 1948 by a tally of 11,618 for (78.5%) to 3,185 against (21.5%) 11/4/48 C.H.  For several years preceding, Charles "Chuck" Dwelley the Editor of the Concrete Herald had used his editorial pages to push for the construction of a bridge over the Skagit upstream of Sedro-Woolley to replace unsafe, inadequate ferries.

Work on the bridge itself did not start until December 1951 when "Dynamiting of the rock promontory at Devil’s Elbow on the upper Skagit river" began. 12/19/51 MVDH. The 644 tons of steel itself did not arrive until late March and early April 1952 from Virginia. 3/20/52 C.H.

When completed, the Burlington Journal declared in its August 7, 1952 edition that The Dalles Bridge, "was financed by a $700,000 bond issue and is a monument to the initiative and determination of the people of Skagit County." 8/7/52 B.J.  One ferry the bridge replaced went to Fir Island and the other at Faber was held as "an emergency replacement for either the Rockport or Pressentin ferry until such time as these can also be retired" - therefore saving the Skagitonian taxpayer almost $2,000 (in 1952 dollars) a month 8/14/52 C.H. - "Concrete Ferry Will Go Down River to Fir Island".

The bridge was formally dedicated during the 1952 Cascade Days ceremonies and Chuck Dwelley was master of ceremonies, speaking about the power of the Skagit people in making the bridge happen.  The formal ribbon was cut by the Cascade Queen Dolores Keller and "Arthur J. Ward, Sedro-Woolley attorney then made the address of dedication in which he told of the many years of working and hoping that preceded the building of the bridge. He commented on the fine work of the men who pushed the bond issue to a successful conclusion, and to those who then took over to build a bridge that is one of the most beautiful in the county." 8/14/52 C.H. - "New Bridge is Opened".

Now on the National Register of Historic Places (#02000323), this 300-foot long bridge was recently recognized by HistoryLink.org, the Online Encyclopedia of Washington State History.  You can read their essay HERE.

According to the August 14, 2004 Skagit Valley Herald "Concrete festival goes back to Cascade Days", the name "Cascade Days" was bestowed in 1934 to the town's "good home fun" festival and the efforts to build a North Cascades Highway across the North Cascades.  The below is from So They Called The Town "Concrete" by Charles "Chuck" M. Dwelley on pages 60 and 61: 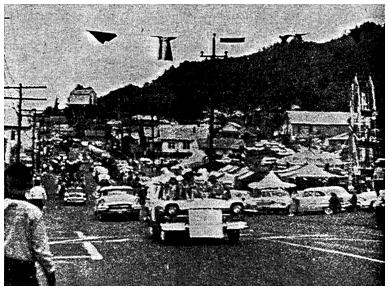 The town, from the time it was the two communities of Cement City and Baker, had a flair for celebrations and special events. Some of the get-togethers were events of rivalry between the two communities where even an election was good excuse to battle the issue out in the saloons and to celebrate the outcome in the same way. There were planned events for holidays with the Fourth of July drawing the largest attendance. There were men who had a genius for arranging dances, ball games and local theatricals. The word spread and often special railroad cars would be added to bring visitors to get in on the fun.

Cement plant picnics were early summer events, and tales are told that the election in which the town became “Concrete” through incorporation was won by the Superior group who furnished a free barrel of whiskey to help make up the minds of the assembled prospective voters.

Over the years of trying to win favor for the highway over Cascade Pass to eastern Washington, many meetings were held with state and national figures attending. One of these turned into sort of a celebration with a parade after the dinner meeting and Cascade Days was born. In 1935 C. E. Tumelson, local marshal, ran for the position of county sheriff and hosted a local rally with a whole steer roasted over a pit in the up-town parking lot. He didn’t win, but assembled a huge crowd for a day of political speeches.

The following year the previously-planned Cascade Highway meeting and celebration sponsored by the Booster Club was taken over by the Eagles and the American Legion and boomed into a Logger’s Contest show with other attractions to entertain a big crowd. Carnival, parade, dances, and Queen contest, and sport features were standard. However, the most ambitious celebration over the years had such attractions as the first parachute jump in Concrete by Archie Griffiths, a local boy; a full-scale rodeo in which one performer was killed; professional acts and a wrestling show — plus airplane rides and numerous parachute jumps in which a woman participated; a Skagit River Canoe Race; Horse Show with drill teams; a hot-rod contest; a Canadian team playing cricket; a barbecued bear eating contest open to all (in which the committee had to pay a fine for getting a bear out of season).

In all, huge crowds assembled as the celebrations in Concrete became widely talked about. Completion of the North Cross State Highway ended that promotion. In recent years the yearly event brought in the wrong type of crowd and more trouble than local law enforcement officers could handle, so the “big” celebration has been discontinued. 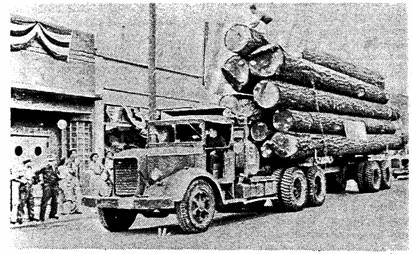 "On behalf of all of Chuck's family I thank the sponsors of today's event and everyone who took part in it. This is an especially unique honor in that it can be called permanent, or as permanent as any material award could be. It isn't going to be torn, lost, or tossed in a drawer. As long as this very substantial bridge stands, so will the name of Charles Dwelley on the plaques at either end. Whether the name ever supplants that of The Dalles, as the bridge is commonly known, remains to be seen.

"I am sure there are people here today who will remember the olden days, before this bridge across the Skagit existed, when people who lived on the south side of the river had no way to get to town in Concrete, In fact, the stepchildren of Chuck himself from his marriage to Alice Hurn were isolated on the south side of the river in those years. Lois Coonc, his stepdaughter, recalls riding the small primitive ferry back and forth to get to school in Concrete before the completion of the bridge in l952.

"The campaign to get a bridge built connecting the two sides of the area can be chalked up as one of Chuck's victories in his efforts for the betterment of Concrete and the surrounding area.

"Chuck used the editorial columns of his paper, The Concrete Herald, as the loud and clear voice of the Upper Valley. Among other major issues that he weighed in on in those bygone days were the completion of the Cascade Highway to connect Concrete and this valley with the eastern side of the state; the elimination of pollution from the cement plant; reforestation to keep the logging industry alive, to name a few. He won some and lost some, but he was always in there fighting for this part, HIS part of the state.

"His name and work is still an important feature, in spite of his being long gone, a victim in 1993 to Alzheimer's disease, with the continued availability of his book, So They Called the Town "CONCRETE." He wrote it originally in 1980 as a commission from the Concrete Chamber of Commerce of that time. The Concrete Heritage Museum now maintains it as one of its main fund-raising projects.

"Today's occasion and outstanding honor will always be a highlight in the memories of Chuck's family and friends. We only wish that he could be with us to savor this moment. It would have meant a great deal to him. We thank you all." 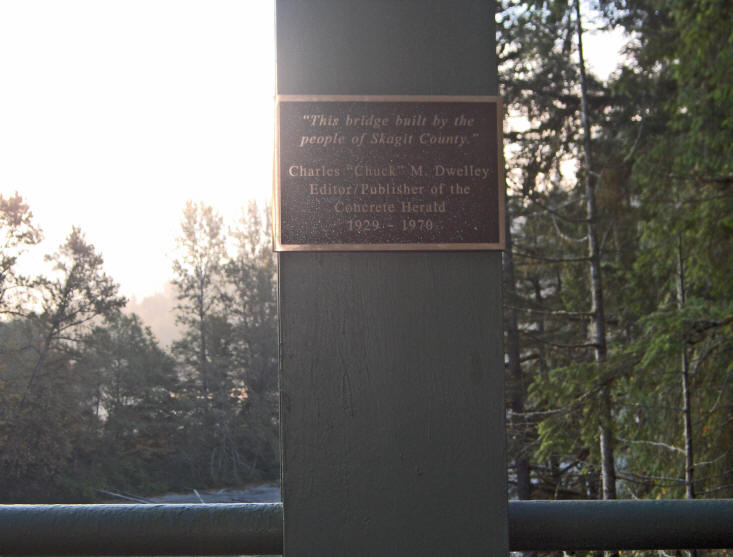